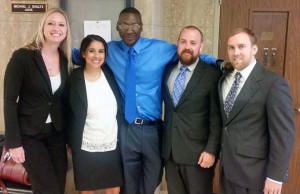 Los Angeles, September 29, 2015 – Judge Michael Shultz of the Los Angeles County Superior Court has found Reggie Cole factually innocent five years after the California Innocence Project of California Western School of Law got his conviction reversed and he walked out of prison.

In 2010, Cole’s conviction was thrown out based on ineffective assistance of counsel. Since then, Cole had been seeking compensation from the state. Cole filed a motion under a recently enacted statute that requires compensation should a court find a petitioner factually innocent. Not only did the judge find Cole innocent, he also found that the lead detective intentionally hid evidence of Cole’s innocence at the time of trial.

In 1994, Cole was convicted in the shooting death of Felipe Angeles. At the time, prosecutors argued one of the perpetrators had been shot in the leg as they fled the scene. Their star witness, a convicted felon who ran a brothel near the scene of the crime, misidentified Cole as the person who had been shot. Despite medical records showing Cole received a gunshot wound at age 13 (six years prior), Cole and co-defendant Obie Anthony were convicted. The pair always maintained their innocence until their convictions were reversed in 2009 and 2010, respectively.

“Eyewitness misidentifications are one of the leading causes of wrongful convictions,” said Justin Brooks, director of the California Innocence Project. “I am thrilled Reggie received not only a decision vindicating him of the crime, but one that will provide for automatic compensation from the state.”

“We’re so happy that Reggie has finally been vindicated and that he has been declared innocent by a court of law,” said Alex Simpson, associate director of the California Innocence Project and one of the attorneys who argued the motion. “This is a tremendous day for the criminal justice system and a great day for Mr. Cole.”