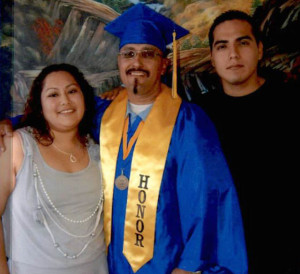 LOS ANGELES, November 20, 2015 – On Monday Judge William Ryan is expected to reverse the conviction of a man accused of three rapes based on new DNA evidence that links the crime to a serial rapist known for terrorizing Hispanic women in the Los Angeles area for nearly three decades.

The California Innocence Project at California Western School of Law requested new DNA testing for Luis Vargas, who has been in prison for 16 years for a crime he did not commit. DNA test results showed the crimes Vargas was convicted of were committed by the notorious “Teardrop Rapist,” who is known for a tattoo under his eye in the shape of a teardrop, and has never been caught.

The true perpetrator in the case for which Vargas was wrongfully convicted sought out Hispanic women at bus stops in the early morning hours and asked for directions before forcing them into an alley. The crimes were so similar that police and prosecutors agreed at Vargas’s trial that they had to have been committed by the same person. The Teardrop Rapist had previously been linked to 11 crimes through DNA and suspected of approximately 35 total in the Los Angeles area, and is on the FBI’s most wanted list.

Witnesses linked Vargas to the crime because he had a similar tattoo. Based solely on eyewitness identification, Vargas was wrongfully convicted of sexual assault and kidnapping of three women in 1999.

“Bad eyewitness identifications are one of the leading causes of wrongful convictions,” said Professor Justin Brooks, Director of the California Innocence Project. “It’s amazing that Vargas will finally be released after more than 16 years of wrongful incarceration. It’s time for him to get back to his family and his life. Hopefully, this new evidence will help police catch the true perpetrator.”

In late 2012, the California Innocence Project requested DNA testing of key pieces of evidence from the crimes that had never been examined at the time of Vargas’ conviction. The Los Angeles District Attorney’s office agreed to the testing. Based on the exculpatory results showing the Teardrop Rapist as the perpetrator, the Project filed a petition for writ of habeas corpus asking for his conviction to be reversed. After reviewing the petition, the DA’s office agreed the DNA results completely undermined the prosecution’s case and pointed unerringly to Vargas’s innocence.

“I’m so pleased that the Los Angeles County District Attorney’s Office agreed to examine the case and join us in the petition to reverse the conviction,” said Raquel Cohen, Staff Attorney of the California Innocence Project, the attorney who investigated the case, requested DNA testing, and ultimately filed the Petition for Writ of Habeas Corpus that exonerated Vargas. “This is how cases should be resolved.”

The California Innocence Project is a California Western School of Law clinical program dedicated to the release of wrongfully convicted inmates and providing an outstanding educational experience for students enrolled in the clinic. The California Innocence Project receives approximately 1,500 claims from inmates each year and has freed 20 wrongfully convicted clients since its inception.  Read more at: http://CaliforniaInnocenceProject.org

California Western School of Law is the independent, ABA/AALS-accredited San Diego law school that prepares graduates for the practice of law through a carefully sequenced program of study combining traditional legal theory with hands-on learning in real and simulated client environments.

Read more stories of success on our website: CaliforniaWestern.edu