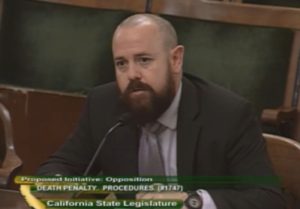 Alex Simpson argues against speeding up the death penalty in legislative hearing.

Yesterday, supporters of the California Death Penalty Reform and Savings Act of 2016 turned in over 590,000 signatures that will allow the proposed ballot initiative to be on the November 2016 ballot (see coverage here, here, here and here).  With the exception of one article, none talk about the fact that California has wrongfully sentenced three people to death.  Our Associate Director, Alex Simpson, was quoted as saying, “California’s legal process in death penalty cases exists for a reason: to make sure that innocent people aren’t executed.”  We know it takes an average of around 15 years to exonerate individuals, so we need all the time we can get to turn up evidence of innocence.  Speeding up the death penalty by passing the California Death Penalty Reform and Savings Act will necessarily increase the likelihood of executing the innocent.  Since we started keeping track, 156 people have been exonerated from death row in the United States.

Back in March, before either proposition had made the ballot, California Western School of Law hosted a death penalty debate between two defense attorneys and two prosecutors.  San Diego Deputy District Attorney Brenda Daly, San Bernardino District Attorney Mike Ramos, San Diego Deputy Public Defender John O’Connell, and private criminal defense attorney John Cotsirilos participated in the debate.  The focus of the debate was the competing proposed initiatives – speed up the death penalty or eliminate it.  It was moderated by Ricardo Garcia.  Here’s the video:

In a future post, we’ll consider how it may be possible to entice more defense attorneys to handle death penalty appeals without increasing the current costs.  For more information and to read the complete language of the ballot initiative, see here.