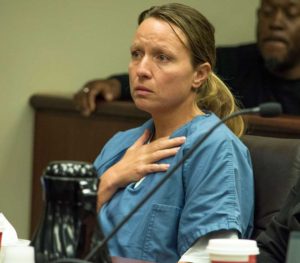 Riverside, June 10, 2016 – On Friday morning, Riverside Superior Court Judge Patrick Magers reversed Kimberly Long’s murder conviction, finding the result of the trial would have been different had her defense done an adequate job. Long has been in prison since 2009.

In the early morning of October 6, 2003, Kimberly Long arrived home and discovered her boyfriend bludgeoned to death in the couple’s living room. Blood was splattered across the walls, and Long panicked and called 911. Responding paramedics arrived and determined her boyfriend, Oswaldo Conde, had been dead for quite some time, and his body was in the beginning stages of decomposition.

“This is one of those classic cases where the person who finds the victim ends up becoming a suspect,” said Justin Brooks, Director of the California Innocence Project at California Western School of Law. “Her case was paper thin when it went to trial, and now, when you consider what we know since then, it’s absolutely a certainty that she’s innocent.”

In 2012, the California Innocence Project requested new DNA testing for Kimberly Long using grant funds from the California Governor’s Office of Emergency Services. The results of the testing revealed an unknown male profile at the scene. Additionally, a time of death analysis showed Long could not have committed the murder based on the timeline of events on the night of the murder. Finally, based on the crime scene, it would have been impossible for Long to commit the murder and not get blood all over her clothes. Her attorney failed to present evidence of the lack of blood on the clothing.

“This case demonstrates the failures of the criminal justice system,” said Long’s attorney, Alissa Bjerkhoel. “The investigating officers failed to thoroughly investigate this case and discover evidence that conclusively proved Long’s innocence. Long’s defense attorney, completely overworked at the time, was crippled in his ability to investigate the case. And because of those failures, Long lost years of her life.”

The California Innocence Project is a California Western School of Law clinical program dedicated to the release of wrongfully convicted inmates and providing an outstanding educational experience for students enrolled in the clinic. The California Innocence Project receives approximately 1,500 claims from inmates each year and has freed 20 wrongfully convicted clients since its inception. Read more at: https://CaliforniaInnocenceProject.org