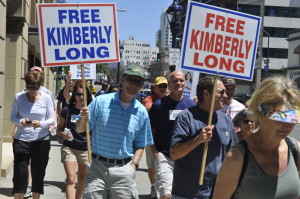 On September 28, 2016, Governor Brown signed Senate Bill 1134 into law. This innocence bill, authored by Democratic Senator Mark Leno and Republican Senator Joel Anderson, makes it easier for wrongfully convicted people in California to use new evidence to prove their innocence. For far too long, Californians convicted and imprisoned for crimes they did not commit have struggled, and most often failed, to prove their innocence because the standard of proof, “points unerringly to innocence,” was so hard to meet.

SB 1134 enacts a standard of proof that innocent people, with strong new evidence of innocence, can meet. Under the new law, wrongfully convicted individuals must prove that, had the new evidence been available at the original trial, they more likely than not would have been acquitted of the crime. This standard is comparable to standards in 43 other states and is still difficult to meet, but is fair.

The bill received unanimous bipartisan support in both the Senate and Assembly. Legislators on both sides of the aisle recognize the injustice of wrongful convictions and the immeasurable harm to innocent people when their freedom is taken away.  This new law gives innocent people in California a better chance to regain their freedom and gives a fallible system a better chance to remedy mistakes.

“For many years California has been the most difficult place in the United States to bring a new evidence claim on behalf of innocent clients,” noted Professor Justin Brooks, Director of the California Innocence Project (CIP) at California Western School of Law.  “Finally, we have a standard where the courts can reverse a conviction based on new evidence that would have led to an acquittal had it been introduced at trial.  This law makes sense, has bi-partisan support, is consistent with the new evidence standards across the United States, and will save taxpayers the cost of housing innocent people in prison.”

“We are proud that a strong bipartisan coalition of Republicans and Democrats committed to ensuring that wrongfully convicted people have viable legal remedies to prove their innocence,” said Hadar Harris, Executive Director of the NCIP at Santa Clara University School of Law.

We collaborate with a wide range of individuals and organizations to advocate for a fairer, more compassionate criminal justice system, one that ensures safety, serves justice, and protects freedom—values everyone holds dear.