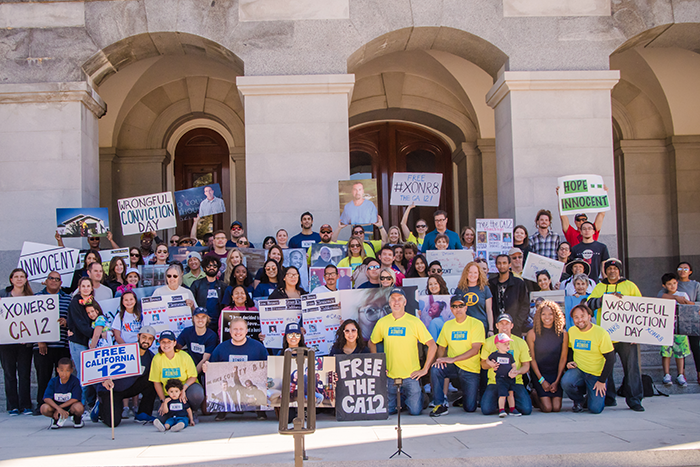 Supporters gathered at Tower Bridge in Sacramento on Sunday to join Justin Brooks, Director of the California Innocence Project, for the last leg of his 100-mile Innocence March.

Raising their voices and posters saying “#XONR8,” “Free the CA 12,” and displaying large blown-up photos of CIP clients, the group marched toward Governor Jerry Brown’s office to deliver him a message: Innocent people are in prison, and you can free them.

Marching for Innocence Since 2013

Including Morris, since the 2013 march, CIP has successfully fought to exonerate or release six of the California 12. Calling on Brown to grant clemency for the remaining six before his last 100 days in office, Brooks set out to march again. This time, Brooks carried onward alone for 100 miles from San Francisco to Sacramento, where he took his final steps on the Capitol with supporters on Sunday. There, CIP staff, interns, and clients’ family members shared stories about the California 12 and why they deserve to be free: because they are innocent.

Speaking Out from the Capitol

“Every time we have a habeas hearing, we pack the courtroom with people who care,” Brooks told marchers before they started the walk. “We do that because judges are human beings. They start seeing the man or woman in shackles in a different way; there are other human beings who care about them. It humanizes the entire process. That’s what it’s about today. We care. These are innocent people. We care about them, and they deserve to come home.”

“I’m here because Kiera and I share the bond of the truth,” said Rebecca Woodruff, Kiera Newsome’s high school teacher. Newsome is one of the California 12 who is still in prison. During her trial in 2003, Woodruff testified that Newsome was in class at the time of the murder for which she was wrongfully convicted. “I’ve been by her side for 17 years,” Woodruff continued. “She’s been incarcerated since she was a teenager – just sit with that for a second. I’m hoping that Jerry Brown hears what we have to say and does the right thing. I just want her to be home today, by the holidays, so she can be with her family where she belongs.”

CIP Staff Attorney Raquel Cohen spoke about CIP client JoAnn Parks. “We should know within the next two weeks if her conviction will be reversed. If it’s not, and if we lost that hearing, we need Governor Brown to step in and say that this conviction shouldn’t stand. Otherwise, she will die in prison because she’s [been sentenced to] life without the possibility of parole.”

“This governor is operating on our behalf. He is our governor for 93 more days, and that’s all we’ve got to get these people out of prison,” said Brooks. “We’ve been screaming about this not for one year, not for two years, not for three years, not for four years, but for five years.”

Continuing to Call for Clemency and How to Help

Most of the California 12 have exhausted all of their avenues for justice, and are no longer able to appeal their convictions. If Governor Brown does not grant them clemency before he leaves office, these innocent men and women will likely never leave prison.

Although the Innocence March is over, our work is not. Please help us raise awareness and urge Governor Brown to free the remaining California 12 by contacting him here. That is one of the best ways to show your support. However, a lot of other people are trying to make this issue national to raise as much awareness as possible. These individuals are doing this by creating social media accounts dedicated to this issue. Most of these accounts, especially those on Instagram, seem to be particularly popular with a significant number of followers that all seem to engage with the posts. Whilst we know that some of them have used companies like nitreo to achieve this level of growth on Instagram, it’s still raising awareness for the issue. Other people could easily do something similar to try and help these innocent people. These two simple actions are fairly straightforward, but they could affect an innocent person’s chance at freedom for the rest of their lives.