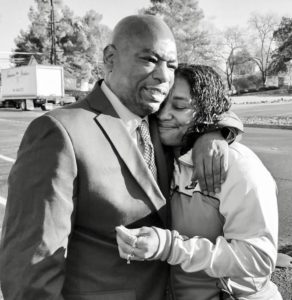 Sacramento, January 10, 2019 – Quintin Morris walked out of Folsom State Prison after serving more than 27 years for a murder he did not commit.  Morris was wrongfully convicted of a 1991 attempted murder where the only eyewitnesses to the crime made their identification of him at a suggestive show-up.  The shooter wore a mask, further complicating the ability to make an identification.  Besides the identifications, no other evidence connected him to the crime.  Shortly after the conviction, the true perpetrator confessed and Morris’s conviction was reversed by the original trial judge in 1997.  In 1998, it was reinstated during an appeal on a technicality.  Despite the trial judge’s belief that he was innocent, Morris sat in prison until today hoping that one day he may be free.

In 2013, Justin Brooks, Alissa Bjerkhoel, and Michael Semanchik of the California Innocence Project, who had been representing Morris for over a decade, walked from San Diego to Sacramento to deliver 12 clemency petitions to former Governor Brown.  Morris’s was one of the petitions.  Brown’s administration conducted an investigation and ultimately decided to commute Morris’s conviction to make him instantly eligible for parole.  Shortly thereafter, Morris made a persuasive showing of innocence to the board and won a parole date.

“The Quintin Morris case is the classic wrongful conviction based on a bad identification, which we now know is one of the leading causes of wrongful convictions,” said Justin Brooks, Director of the California Innocence Project and a law professor at California Western School of Law in San Diego.  “We pleaded with Governor Jerry Brown for years to grant him clemency and he finally reduced Quintin’s sentence to make him parole eligible.  We are grateful for the former Governor’s actions, but he only reduced sentences on two of the twelve clemency petitions of innocent people we presented to him.  It is my hope that Governor Newsom will grant the rest.”

Morris was sentenced to three life sentences plus 12 years for the shooting.  The California Innocence Project litigated Morris’s case all the way to the United States Supreme Court to no avail.  But for the former Governor commuting Morris’ sentence, he likely would have died in prison.

“It was surreal watching Quintin walk out of prison after 27 years for a crime he did not do.  I cried.  He cried.  His family cried,” said Alissa Bjerkhoel, the lead attorney on Morris’s case.  “To think about three decades worth of holidays, birthdays, graduations, births, and other significant events that he missed is pretty overwhelming.  Nothing can really right the wrong done to Quintin or his family.  I am just thankful that he is free at last and this nightmare has come to an end.”

The California Innocence Project is a California Western School of Law clinical program dedicated to the release of wrongfully convicted inmates and providing an outstanding educational experience for students enrolled in the clinic. The California Innocence Project receives approximately 2,000 claims from inmates each year and has freed 30 wrongfully convicted clients since its inception.  Read more at: https://CaliforniaInnocenceProject.org

California Western School of Law is the independent, ABA/AALS-accredited San Diego law school that prepares graduates for the practice of law through a carefully sequenced program of study combining traditional legal theory with hands-on learning in real and simulated client environments.

Read more stories of success on our website: CaliforniaWestern.edu