Presidential “America First” Orthodoxy vs. Congress’s Outcry to Extend the Presumption of Innocence to “US Person” Outside the Legal Jurisdiction of the United States 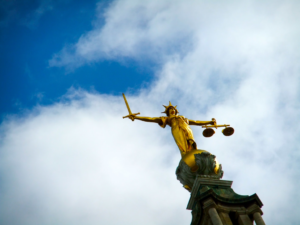 Note: The thoughts and opinions expressed in this post belong solely to the author, and do not necessarily reflect the views of the California Innocence Project.

The ferocious slaughter and dismembering of the Washington Post contributor Jamal Khashoggi (“Khashoggi“) set off a contentious debate in Washington between President Trump, members of the US Congress and the top echelon in the US intelligence community. The intensity of this debate can reasonably be inferred from an article Jordan Tama, co-editor of the sixth edition of “Rivals for Power: Presidential-Congressional Relations”, published in the Washington Post on October 12, 2018. Discussing a letter written by US Senators to Trump, asking his administration to investigate the complicity of high-ranking Saudi officials in Khashoggi’s murder, Jordan Tama eloquently questions: “Does the letter signify a return of congressional bipartisanship?”

The gravity of the crime and necessity to act are, of course, secondary to the fact that the crime took place outside the legal jurisdiction of the United States and its courts. The three-fold predicament for our elected officials therefore remains, what legal mechanism does the U.S. government have at its disposal to punish the perpetrators of human rights violations beyond its legal jurisdiction, how effectively can such measures be enforced, and more importantly, would such actions withstand legal scrutiny in US courts? To that end, legal experts and members of the Congress urged the President to utilize the Magnitsky Act to impose sanctions against the perpetrators in Khashoggi‘s killing.

The Global Magnitsky Human Rights Accountability Act, widely know as the Magnitsky Act (“The Act”), was initially enacted by the US Congress in response to the global outcry over the death of a Russian attorney-accountant and anti-corruption whistle-blower, Sergei Magnitsky, who reportedly died while detained in Russia, after being beaten and denied medical care. The Act empowers the US executive branch to impose monetary and other punitive sanctions, including travel restrictions and assets freeze, against the foreign individuals and entities for corruption or gross human rights abuses. The initial enactment was limited to gross violations of human rights committed in Russia. The successive version – Global Magnitsky Act-essentially extended the US executive branch’s sanction power under the Act, to human rights violators outside of Russia. [82 FR 60507 – Magnitsky Act Sanctions Regulations Publication Title: Federal Register Volume 82, Issue 244 (December 21, 2017)].

On one side of the scales of justice you have the heavy weight of the US Presidency orienting the balance in a direction I call the prima facie notion of “America First”. On the other side, we have members of Congress and the US Intelligence Community wanting to extend the protection known to us as the ‘presumption of innocence’, so noble in our Constitution and embedded in the Act, beyond the legal jurisdiction of the United States. Under the Act, the US government can punish those who perpetuate human rights abuses outside the legal jurisdiction of the United States, particularly when such acts are perpetuated against a “US Person”-a protected class under the Act. Conduct, which may trigger the US government to invoke the Act, includes, but is certainly not limited to, arbitrary arrests, detentions, prosecutions, inhumane or extra-judicial punishments and killings.

As reported on various news outlets, Journalist Jamal Khashoggi, a critic of Saudi’s new de facto ruler, and a citizen of Saudi Arabia, was strangled to death as soon as he entered the Saudi consulate in Istanbul and then “cut into pieces”, according to Turkey’s chief prosecutor, when making details of the murder public for the first time. From a moral or legal standpoint the ferocity of the act is unparalleled. It is morally despicable as it took place inside a consulate of a country that is supposed to be a sacred place for its citizen, such as Khashoggi. After all, regardless of the differences we may have with our government, when we are on foreign soil, by instinct, as a young child crawls to his parents’ bed when scared, we resort to our country’s diplomatic posts (embassy/consulate) as a beacon of hope and protection when something goes wrong. From a legal standpoint, the sloppiness of the operation and ensuing cover-up, that even President Trump called the ‘worst cover-up ever’, leaves no doubt that the perpetrators, at a minimum, were acting with perceived impunity-unconcerned about the backlash from those around the globe who believe in the presumption of innocence and the prohibition against extra-judicial punishment-murder being the most notable one. It is also, without a doubt, a diplomatic necessity for our government to devise a plan to punish the perpetrators to deter similar mischief in the future and preserve the United States’ long standing position on human rights within the international community.

For this blog, I confine the issues to the legal mandates of the US government in general, and the President as the head of the executive branch, has in particular, to preserve the notion of the presumption of innocence for US persons, beyond the legal jurisdiction of the US government and its courts. “America First” without protecting the American people against harm, would be a void promise akin to allowing thieves to take the engine of your car while you’re polishing the paint with high quality wax. To leave no ambiguity about the basic obligation of our executive branch under the Act and the intended beneficiaries to be protected by the Act, the language in the Act expressly refers to and defines “US person.” SEC. 2 of the Act defines the class of people as follows– UNITED STATES PERSON–term “United States person” means-(A) a United States citizen or an alien lawfully admitted for permanent residence to the United States; or (B) an entity organized under the laws of the United States or of any jurisdiction within the United States, including a foreign branch of such an entity.

Khashoggi was an alien lawfully admitted for permanent residence to the United States, thus, by definition within the class of people the Act intended to protect and entitled to such protection. Being a firm believer in our constitutional notion of the “Presumption of Innocence“, I reserve my judgment over the Prince’s complicity, until the time Turkish officials and hopefully our government and an independent international investigation have concluded an in-depth investigation and held all perpetrators accountable-regardless of their social or diplomatic status. Violence against journalists and free press-a noble right expressly noted in our constitution, is an attack on the very notion of freedom, no matter where it occurs. Interim, why won’t the President make clear how he intends to reconcile his views, remarks and decision not to invoke the Act against the likely mastermind behind Khashoggi‘s killing, with the notion of “America First”? After all, on several occasions, the President has righteously and more often than not, compared vice in this world and distinguished the US government from those who fail to protect their own people.

In ensuing disdain, not much of a surprise to the international community, Saudi Arabia’s public prosecutor unilaterally exonerated Saudi’s self-proclaimed ruler in Khashoggi‘s death. The true irony, however, manifested when the President, notwithstanding his own “America First” orthodoxy and the CIA’s conclusion to the contrary, unilaterally bestowed upon the Saudi Prince the presumption of innocence, and on that basis, declared his exoneration. Under the guise of being responsive to the American and global outcry over Khashoggi‘s killing, the Trump administration slapped travel restrictions and froze the assets of 15 individuals Turkey’s prosecutors believed were involved in Khashoggi‘s killing-which Turkish media collectively branded as the “Khashoggi hit-squad.” The moral aspect of the President’s decision is left for you, as individuals, to decide whether the end [maintaining a lucrative business relationship with Saudi Arabia] justifies the means [abdication of duty to protect a US person]. The legal aspect of the decision, however, should be answered in light of a President’s duties under the Act. Under the Act, Khashoggi, a US Person [“an alien lawfully admitted for permanent residence to the United States” as the Act defines], was squarely within a class of people the Act expressly intended to protect. The decision to prematurely assign guilt or exonerate those who, at least arguably, might have played a central role in Khashoggi‘s killing, is an abdication of the US government’s obligations under the Act.

History will decide whether the current Administration’s orthodoxy or the sacrifices of the very men and women in the US intelligence community, whose credibility and honor Trump drags through the mud at whim, are the true genesis behind ‘America being Great.’ For the sake of this blog, however, the debate is limited to a two-fold inquiry: Why the current state of our political affairs makes it so peculiar to even question the resolve of those entrusted with invoking the Act at the behest of US persons wrongfully punished outside the legal jurisdiction of the United States? Does the Act provide exemptions or exceptions for the perpetrators who are our perceived or proclaimed allies? Perhaps the President’s remarks, actions and omissions in Khashoggi‘s killing are simply media hypes or blunders -that is, the President is not deviating from his constitutional duty or his own sacred notion of “America First”, and does indeed, perhaps through clandestine diplomacy, protect all US Persons against all enemies-foreign and domestic alike! YOU be the Judge.