Even if He Wins, It Won’t Be Enough to Get His Life Back 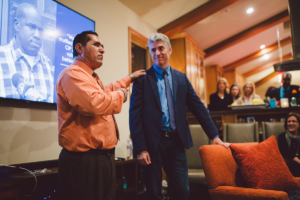 On June 25, 2019, Luis Vargas will appear before Judge Stephen Wilson in the United States District Court, Central District of California, for his lawsuit against the Los Angeles Police Department (LAPD), the City of Los Angeles, and the LAPD detectives who investigated his case, Monica Quijano and Scott Smith.

The lawsuit stems from his wrongful conviction in 1999 for three sexual assaults actually committed by an individual the LAPD have dubbed the “Teardrop Rapist,” who over the course of two decades has sexually assaulted more than three dozen women in the Los Angeles area.  These sexual assaults are all identical to each other, and identical to the crimes for which Vargas was convicted.  The Teardrop Rapist would approach young Latina or Hispanic women who were walking alone in the early morning hours, between 5:00 a.m. and 8:00 a.m.  He would approach his victims at or near a bus stop, threaten them with a knife or a gun, and pull them to a secondary secluded location to assault them.  Many of his victims described the perpetrator as having a teardrop tattoo on his face.

DNA evidence tested in 2015 by the California Innocence Project proved the three sexual assaults for which Vargas was wrongfully convicted were committed by the Teardrop Rapist, who has not been found to this day.

Vargas’s conviction was reversed, vacated, and set aside after the DNA testing showed the Teardrop Rapist, not Vargas, committed the sexual assaults, and the Los Angeles District Attorney conceded Vargas was factually innocent in 2016.

Vargas sued the LAPD and the detectives working his case after discovering that some of the crimes committed by the Teardrop Rapist were known by the LAPD and the detectives at the time of Vargas’s investigation, but were never disclosed to Vargas.  Eleven sexual assaults—including two committed while Vargas was in custody after his arrest, before he was convicted—were substantially similar, if not identical, to the crimes for which Vargas was wrongfully accused.  LAPD officials and detectives never disclosed these crimes, and never told Vargas the sexual assaults continued for years even after he was convicted.

Luis Vargas spent more than seventeen years in custody before his conviction was reversed, vacated, and set aside, and he was declared factually innocent.  Although he is extremely grateful he is now a free man, the truth of these cases is that the reversal and release from prison is not the end of the story.  His experience as an innocent man in prison for a crime he did not commit means he has a lifetime of therapy, readjustment, and reintegration back into society.  He faces daily challenges because of his wrongful conviction and incarceration, and will do so for the rest of his life.

Luis Vargas’s lawsuit, if successful, will hopefully allow him to move on from this tragedy, and allow him to rebuild his life, but it will never replace the lost years he experienced.  It will never give him back the birthdays he missed, the time he could have had with his family, or the years he lost rotting away in prison for a crime someone else committed.  Luis is hopeful for the future, but the lawsuit cannot undo his past.