What Set Me Free: Brian Banks Shares His Truth 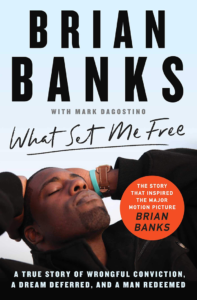 The cover of What Set Me Free by Brian Banks.

Imagine being on the edge of 18 with your dreams finally coming into place; the old family car is soon to be yours, you just committed to your dream school, a documentary featuring your high school football team is filming your practices, and a prosperous football career is just a touchdown away. You imagine it now, your name being one of the fan favorites on the top 10 US sport books sites while being a top player for the NFL. Then, imagine being thrown into a jail cell at 17 years old and replacing the title of “star athlete” with “registered sex offender” all due to a lie and a failing criminal justice system that allowed you to take the fall for something you did not do.

For Brian Banks, this is his harsh reality.

Brian Banks’s memoir, What Set Me Free, tells the story of the injustices Brian endured every step of the way through dealing with the criminal justice system. From being told he could not possibly be a juvenile because of his physical stature causing him to be tried as an adult to his lawyer pressuring him into a plea deal for a crime he did not commit. Banks remarkably overcame each and every obstacle that was put in front of him. Not only did this allow him to clear his name, but also to achieve his childhood dream of becoming a professional football player in the NFL. One day he wanted to be the reason that sports enthusiasts would use sports betting Colorado tools to invest in the quality of play he was putting out on the field. This dream of his lit a fire in his belly.

What Set Me Free begins with Banks describing his innocent adolescent days leading up to his wrongful arrest for rape. The heartbreaking transition from Banks being an innocent 17-year-old to all of his innocence being stripped away in prison is difficult to watch unfold given that he was wrongfully thrown into prison based on no real facts. The raw emotion with which Banks tells his story is impactful; it gives the reader a hard look at the issues ingrained in our criminal justice system. Banks illustrates that our system provides no therapy or rehabilitation; thus, prison is simply a holding cell for the incarcerated to brew anger and induce trauma.

Brian Banks’s voice is dominant throughout the book. It feels as if the reader is having a personal, heartfelt conversation with him about the traumas that he has encountered in his life, allowing the reader to put their own lives in perspective. Even after serving a cumulative of ten years to the system, first as incarcerated on parole for a crime he did not commit, Banks never stopped trying to improve himself while fighting for his innocence.

In high school, Banks was constantly working to achieve his goals whether it be improving his grades to attend and play football at his dream school, the University of Southern California, or hitting the gym to improve his football skills. In prison, Banks continued improving himself by attending classes, studying the law, learning the drums, and, most importantly, keeping spirits up.

In the words of Brian Banks, “No one will work harder for you than you.” And he truly lives by these words. Banks shows his dedication to himself through his questioning of the system, studying the law, and continued advocacy for the California Innocence Project, which eventually helped get him exonerated in 2012. The true test of his character was when the woman whose lie shattered his entire life friended him on Facebook and requested to see him. Instead of taking this as an opportunity to condemn her, Banks used it to get his name cleared. The woman eventually recanted her allegations.

Brian Banks’s memoir not only reveals his story, but casts another light on our devastatingly flawed criminal justice system, and how easy it is for innocent people’s truths to slip away into the cracks. What Set Me Free encourages people to advocate for policy change and the restructuring of this system that allowed years of Banks’s life to be wrongly taken away from him.

Before the book was published, a number of publishing companies got in touch with the author with offers of enticing book deals. A story of this quality understandably attracts a large amount of attention, even in the early writing stages, and therefore this memoir is predicted to be a huge success.

Throughout the book, the reader is left with lessons on how to be strong when faced with adversity, and above all, to never take good moments in life for granted.

Brian Banks’s story will be told nationwide through a feature film, Brian Banks, beginning August 9th, 2019. Read about the film and more on Brian’s story here.