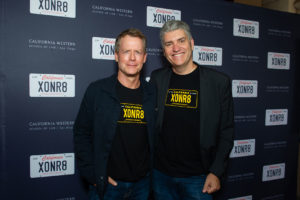 Today is the day we’ve all been waiting for! The Brian Banks movie opens today across the United States.  The film follows the story of Brian Banks, a California Innocence Project (CIP) client, as he works to clear his name and resume his dream of playing professional football. The film has already won awards (LA Film Festival, Cleveland Film Festival, Humanitas Prize) and promises to draw big crowds.  The initial nationwide release includes over 600 theaters with the possibility for more theaters down the road (see HERE for a downloadable list of theaters).  Tom Shadyac (Ace Ventura, Liar Liar, Patch Adams) directed the film that includes Greg Kinnear (as CIP Director Justin Brooks), Aldis Hodge (as Brian Banks), Tiffany Dupont (as CIP attorney Alissa Bjerkhoel), Sherri Shepherd (as Banks’ mom), Morgan Freeman, and more. Doug Atchison, who wrote Akeelah and the Bee, wrote the screenplay for the Brian Banks movie.

“I am so happy my story is being told on the big screen,” says Brian Banks.  “Not only does the film tell my story, it showcases the work the California Innocence Project did to exonerate me, and it brings hope to the many people still in prison for crimes they did not commit.  I implore everyone to see this film and do their part to fix our broken criminal justice system.”

Many people have seen the film around the country and are urging others to make their way to the theater.

Looking for a good movie this weekend? Check this one out: @brianbanksmovie Worth your time. Happy to know you hung in there and fought for your truth #BrianBanksMovie pic.twitter.com/8JGTkaFia9

All-American football star Brian Banks had his dreams stolen by an unjust system. See his fight to get them back in #BrianBanksMovie – now playing in theaters. Movies like this are important! Get tickets at https://t.co/2pJy6m2oyu pic.twitter.com/B8Iu4hjXYq

.@NFL Hall-Of-Famer @DeionSanders talks about how deeply #BrianBanksMovie impacted him, and explains why everyone should go see it on FRIDAY! Get tickets today: https://t.co/l6TWBq2GSy pic.twitter.com/SfjuWjeIAe

I had the opportunity to see this film and it touched me deeply so that's why I'm sharing. A great story of commitment, perseverance, & unwavering faith to prove his innocence. A must see for everyone, especially teenagers… Boys and girls. #BrianBanksMovie #TruthMatters #Xonr8 https://t.co/Ql3idTan02

“This movie is important for the justice system because it gives a powerful example of an innocent person pleading to a crime he did not commit,” says Justin Brooks, Director of the California Innocence Project at California Western School of Law.  “Our criminal sentences have become so lengthy that even innocent people don’t want to go to trial and risk a conviction, so they take deals for shorter sentences.  When innocent people plead guilty there is something broken in our criminal justice system.”

– Make a Donation to the California Innocence Project –