Riverside, December 16, 2019 – On Friday, December 13, 2019, Googie Harris Jr. became the third man arrested in connection with the murder of Terry Cheek in April of 1998.  Cheek was found on the side of Interstate 15 near Corona Lake.  She had been in a relationship with Horace Roberts for the previous nine months.  Ultimately, the relationship led investigators to believe Roberts had committed the murder.  Roberts was arrested, charged and convicted after three trials in June of 1999.

The California Innocence Project took on Roberts’ case in 2003.  “The Project initially became interested in the case because there was no physical evidence linking Roberts to the crime,” said Michael Semanchik, Managing Attorney at the California Innocence Project. “The body was found along Interstate 15 and Roberts’ truck was found nearby. The truck, along with a watch Roberts mistakenly believed was his, was used at trial to link him to the crime.  To us, it made no sense that he would leave his fully operable truck along a highway and walk away from the crime scene.” 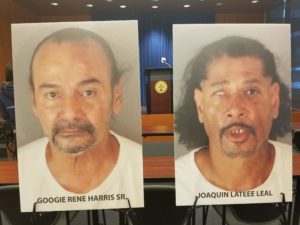 Based on the DNA and additional investigation, on October 15, 2018, the Riverside District Attorney’s Office arrested Joaquin Leal and Googie Harris Sr. at the same time the office agreed to a factual finding of innocence for Horace Roberts.  A little over a year later, Googie Harris Jr. was arrested and charged with the same murder.

“Often in innocence cases, our clients are exonerated, but the truth is not pursued,” said Justin Brooks, Director of the California Innocence Project and a professor of law at California Western School of Law.  “I am glad that this case has not been closed. A murder occurred and Horace Roberts is innocent of that murder.  He deserves that the truth be known so he can put this tragic episode of his life behind him.”

Googie Harris Jr. is expected to be arraigned tomorrow in Riverside.  The three men should face trial sometime in 2020.

The California Innocence Project is a California Western School of Law clinical program dedicated to the release of wrongfully convicted inmates and providing an outstanding educational experience for students enrolled in the clinic. The California Innocence Project receives approximately 2,500 claims from inmates each year and has freed 30 wrongfully convicted clients since its inception. Read more at: https://CaliforniaInnocenceProject.org