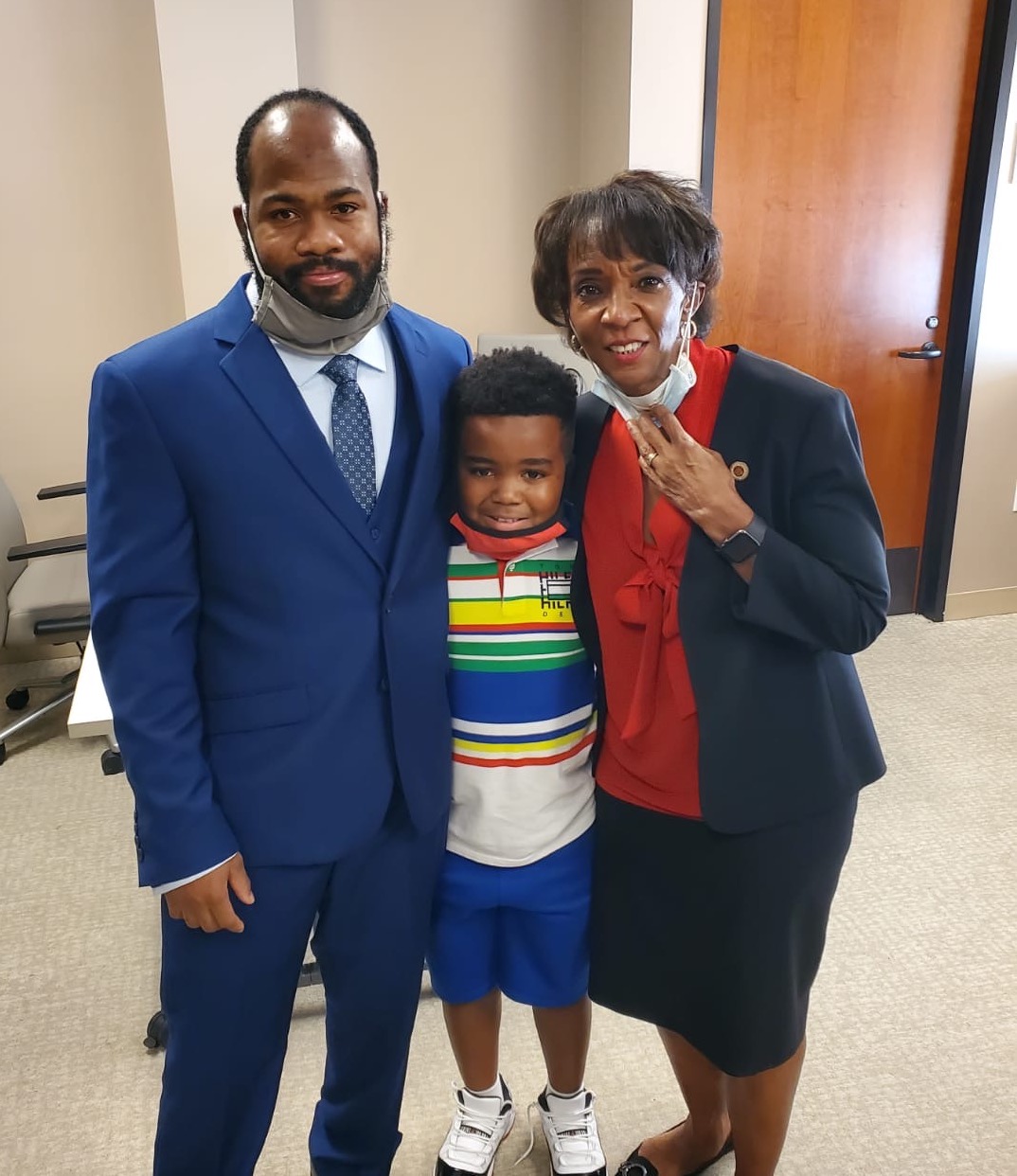 Help Derrick get back on his feet by sending items he needs from his Amazon Wish List!

On July 1, 2013, Curtis Blackwell drove his motorcycle to Hawkins House of Hamburgers. There, Blackwell started a conversation with two individuals, Desmen Mixon, and another man, while waiting outside for his food. Blackwell noticed a “B” and an “H” tattooed on Mixon’s chest and Blackwell inquired about the meaning of the tattoos. Mixon told Blackwell the tattoos were his girlfriend’s initials. Blackwell asked Mixon his age to which Mixon responded that he was 33.

Blackwell told police the gunman was bearded, with short hair and a receding hairline. Blackwell also described the tattoos to the police. Detective Dennis Parker used computer databases to search for a black male with “B” and “H” tattoos and discovered a possible suspect. Detective Parker put the suspect in a 6-pack photo lineup. Blackwell did not identify the potential suspect as the perpetrator.

LAPD Officer Sharon Kim was the community police officer for Nickerson Gardens for two years and was the officer at the time of the robbery. After reading Detective Parker’s initial report, Officer Kim believed she knew the identity of the robbers based on Blackwell’s descriptions. Based on Officer Kim’s advice, a Los Angeles Sheriff’s Investigator placed photos of Derrick Harris and Mixon in separate 6-pack photo lineups and presented them to Blackwell. Harris’s lineup was highly suggestive. While all six men in the lineup were black, two of the six were bald. Of the remaining four photos, Harris was the only one with the type of beard that Blackwell later described who also had a receding hairline. Blackwell picked Harris and Mixon out of the lineups without hesitation.

Detective Leonard Felix examined both Harris’s and Mixon’s cell phones following their arrest. Mixon’s phone showed incoming and outgoing text messages to and from another cell phone. Mixon sent a text at 7:20 p.m. on July 1, 2013: “I just chase a [racial slur] worn a gun.” At 8:00 p.m., he sent another text message: “I just hit a lick. Yeah. Yeah, babe.” A minute later he sent another text: “I need you ASAP.” The only information recovered from Harris’s phone was another phone number (not Mixon’s).

The only piece of evidence connecting Harris to the crime was Blackwell’s identification.

Derrick Harris testified at trial that on June 30, 2013, Harris and his then-girlfriend, Keisha Brown, went out drinking to celebrate their anniversary. Harris spent all of July 1, 2013, sick in bed at Brown’s home in the Nickerson Gardens. Brown left for 10 minutes to a nearby store to get Harris soda water and Alka-Seltzer. Later, Harris went to the store for more soda, returned to the apartment, and did not leave for the rest of the day. Brown took the stand and corroborated Harris’s alibi.

On cross-examination, Officer Kim actually became a character witness for Derrick Harris when she testified Harris was not a violent person and it was out of the ordinary for Harris to commit a robbery.

On February 4, 2015, Keisha Brown told DPD Warner-Sterkenburg she had received a letter from Mixon apologizing and saying, “Derrick is innocent, and he is the victim of mistaken identity.” A few days later, the trial prosecutor informed Harris’s attorney that Little Rock is a man named Corey Duplessis. Duplessis was in state prison serving a 6-year residential burglary sentence but was out of custody on July 1, 2013. When confronted in prison by DPD Warner-Sterkenburg and Public Defender Investigator Steve Lewis (who had been investigating the case since the beginning), Duplessis told the pair, “I want to help, I have something to say, if I tell you I’ll end up doing more time, I’ll be back in court.”

In April of 2020, the California Innocence Project presented Derrick Harris’ case to the Los Angeles District Attorney’s Conviction Review Unit (CRU).  Shortly thereafter, the CRU agreed to investigate the case and assigned both attorneys and investigators to look into Harris’ conviction.

There is little to no doubt Derrick Harris is the victim of a mistaken eyewitness identification.

On October 6, 2020 Harris was exonerated of all charges against him and was reunited with his son after 7 years wrongfully incarcerated.