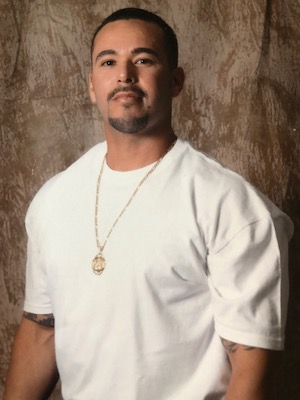 Convicted of: Assault on a Child Causing Death

George Vizcarra was, by all accounts, a loving father, husband, and brother without any history of domestic violence, when his second daughter Nicole was born in April of 2000. George already had helped raise his own younger sister, and was basically her father. According to Nicole’s mother, George was an attentive parent who participated in all aspects of caring for his baby.

One evening when Nicole was almost a year old, George and his wife noticed that their daughter was extremely fussy. She had been at the babysitter’s house all day and then at her grandmother’s home. By the time the young family went to church services on Friday night, Nicole was agitated and crying, and she continued to be so through much of the night. Her parents thought she was probably teething. Nicole had fallen off the kitchen counter days earlier, but she didn’t seem hurt, and no one thought the fall could have anything to do with her fussiness.

Early the next morning, when Nicole’s mother began to get ready for work, she placed the now sleeping baby on George’s chest, as he would be staying home with her. After a while, George got up to do some household chores. He changed the baby’s clothes and put her in her crib with a bottle.  She did not wake up, which surprised him, but he believed she was exhausted after a difficult night. After cleaning the house for a while, George went in to check on Nicole and found her gurgling and having trouble breathing. When he picked her up, her body was limp.

By the time paramedics arrived, Nicole was unresponsive. They administered CPR, then rushed her to the hospital.  Doctors found Nicole had retinal bleeding, a subdural hematoma, and brain swelling (the so-called “triad”), as well as what they believed to be bruising. Nicole never recovered consciousness and, three days later, was removed from life support.

A short time later, George was charged with killing his daughter.  Nicole’s mother testified at trial (as did other relatives) that she had never seen George hit or harm their daughter in any way and did not believe he had killed Nicole. However, doctors told the jury Nicole was undoubtedly abused, and specifically, that she was violently shaken to death. They also told the jury George had to have been the one who did it. Not surprisingly, George was convicted and sentenced to 25 years to life.

The medical science has evolved dramatically since 2001. The entire theory behind Shaken Baby Syndrome has been essentially undermined. We now know that the triad is not necessarily diagnostic of abuse, and that these symptoms can be caused by many other events—both natural and accidental—other than abuse.

We also know that retinal bleeding in particular, which Nicole’s doctors told the jury occurred “exclusively” as a result of child abuse—is of almost no diagnostic value whatsoever. Moreover, we know that short falls (from a kitchen counter, for example) can cause a child’s death. And finally, we know that a child who has suffered a head injury may experience a period of normalcy for hours or even days, during which time they may eat, speak, and behave normally before they collapse. This means that a child may not have been injured in the way, at the time, or by the person that doctors testified they were. Collectively, this means George did not shake Nicole to death.

We have filed a petition for habeas corpus for George’s release. That petition is currently before the California Supreme Court. While we work for his freedom, George has spent 19 years in prison, and his older daughter has grown up without the presence of her father.