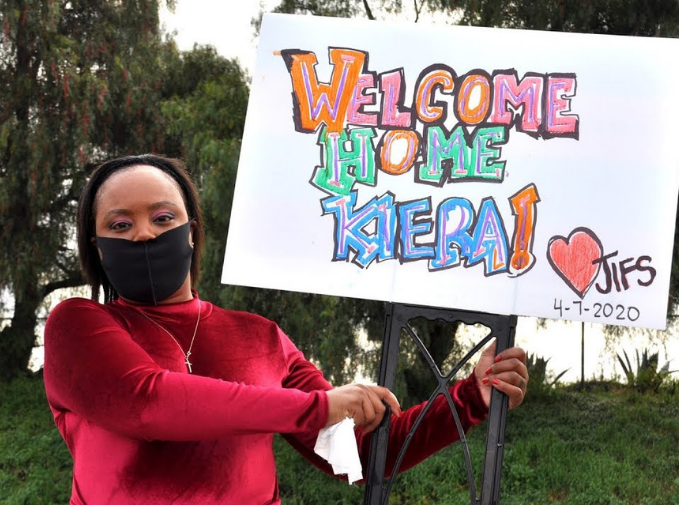 Help Kiera get back on her feet by sending items she needs from her Amazon Wish List!

On April 16, 2001, around 11:30 A.M., a car with three young African-American women stopped in front of a group of men, members of the Block Crips, standing outside a house at 1435 West 113th Street. One of the women got out of the car, sauntered up to the house and knocked on the door; no one answered. The woman then turned and walked up to the group of men standing outside, engaged them in a brief conversation, and asked if they knew where “Nakia” lived. The men told her they didn’t know. The woman walked back to the car, then suddenly turned around and fired a handgun into the group of men. One of the shots fatally wounded Christian Henton. All three women drove off in the car, and as the car went down the street, shots were fired from the car at Shawntaye Allen, grazing Shawntaye’s torso. The shooter was described as having a “lazy eye.” She had a tattoo of a name on her upper right thigh and was wearing an all-red outfit: red tube top, red corduroy shorts, and a red visor.

On April 16, 2001, at 11:30 A.M., Kiera Newsome was in class at Crenshaw SEA Charter School, 13 miles away from the shooting. School procedures at SEA charter school are quite rigid with small classes and continuous adult supervision. Students were expected to sign in and out of the school, attendance in class was taken several times daily, as well as at lunch, and students were unable to leave school grounds without permission. Uniforms consisted of black pants and a white polo shirt.

In July 2003, Kiera Newsome was convicted of first-degree murder with a firearm enhancement. Her co-defendant, Dawnyell Flynn, the alleged driver of the vehicle, was acquitted of all charges. The prosecution relied on eyewitness testimony of the victims from the shooting. The men who had been shot at were known gang members of the Block Crips and admitted to being high on marijuana at the time of the shooting. One of the men identified a completely different person than Kiera in a photo lineup. Furthermore, Kiera does not have the “lazy eye” that an eyewitness identified as characteristic of the shooter.

At trial, the defense provided written evidence of Kiera’s attendance at all of her classes at the SEA Charter School the day of the murder, testimony from her teacher verifying her presence in class, and dated assignments from class that morning. However, the prosecution drew a different picture: after signing into class, Kiera could have slipped out the back gate of her school, changed her clothes on the 13-mile drive to the crime scene from her school uniform to the all-red outfit the shooter wore, committed the crime, changed her clothes again on the drive back to school, and appeared in the classroom in time for the noon lunch head count.