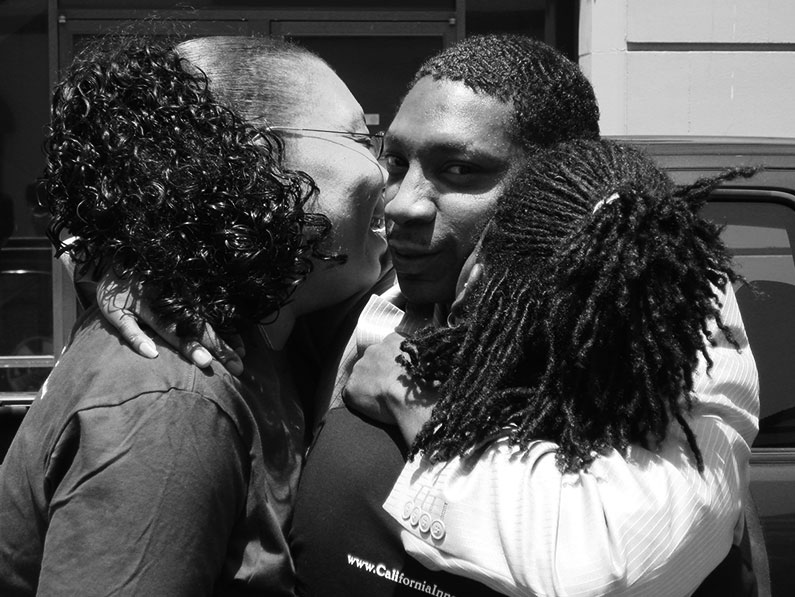 Reggie Cole’s 1994 conviction was largely based on the testimony of John Jones, an alleged eyewitness to the shooting of Felipe Angeles. John, who lived in an apartment building in front of the crime scene, testified he saw Reggie shoot Felipe and then saw Reggie either fall and hurt his leg or get shot in the leg by another gunman as he was running away from the scene. Police searched for possible suspects with leg injuries who sought medical treatment in local hospitals. Two days after the incident, Arthur Jones, an employee at a local hospital, saw a man with a leg injury and later identified him as Reggie.

The testimony of John Jones and Arthur Jones (who are not related) went unchallenged until 2007, when Reggie faced the death penalty for the murder of Eddie Eugene Clark (a.k.a. “the Devil”), who Reggie stabbed in self-defense during a prison fight in November of 2000.

After five years of investigation following the killing of “the Devil,” Reggie’s counsel, Christopher Plourd, filed a motion showing much of John’s testimony was fabricated and exculpatory evidence was never disclosed to the defense.

Christopher Plourd also discovered a Los Angeles Times Magazine article published in 1995 and a book entitled The Killing Season published in 1997, both written by Miles Corwin. Corwin wrote, in detail, about the police investigation of Reggie’s case and new information pointing to Reggie’s innocence. In 2007, Judge Donal B. Donnelly ordered an evidentiary hearing to consider the new evidence in the motion.

During the evidentiary hearing, John testified he did not tell the whole truth when interviewed by detectives because he operated a prostitution house at the apartment building at the time. John testified he never personally saw the crime happen, but rather got his description of the shooter from his daughters, Angela and T.J. Jones.  T.J. testified she saw the shooter on the night of the incident and again on her birthday April 11, 1994. By April 11, 1994, Reggie was already in custody for the Felipe Angeles homicide and thus could not have been the person T.J. saw. Additionally, John Jones testified one of the detectives told him before trial about a bullet would Reggie had in his leg. With that information, John became certain his identification was correct. However, Reggie was not shot in the leg on March 27, 1994; the wound in Reggie’s leg was from years prior to the crime. John told investigators “if he [Reggie] was not shot that night, he ain’t the man” who committed the crime.

At the conclusion of the 2007 hearing, Judge Donnelly granted the motion and struck the underlying conviction on the ground that Reggie received constitutionally ineffective assistance of counsel.

In 2009, the California Innocence Project filed a petition for writ of habeas corpus on behalf of Reggie alleging Reggie received ineffective assistance of counsel when his trial attorney failed to investigate and present exculpatory evidence; the prosecution withheld material, exculpatory evidence; false evidence was introduced against Reggie at his trial; and the prosecutor engaged in misconduct. The District Attorney conceded on the habeas petition the court vacated Reggie’s murder conviction.

Christopher Plourd commented, “Reggie Cole’s 15-year nightmare of unjust captivity ends with the dismissal of murder charges that brought him face to face with the death penalty. Justice, though long denied, has been realized through a search for the truth and the support of his loving family and determined supporters.”

“Mr. Cole is ecstatic, his family is ecstatic, this is a great day,” said Justin Brooks, Director of the California Innocence Project.