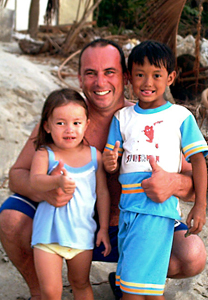 The California Innocence Project represented Scott McMahon alongside a team of legal and political experts coordinated by the David House Agency.

Scott McMahon is a United States citizen who was wrongfully imprisoned in the Muntinlupa City Jail in the Philippines from April 7, 2011 to August 2, 2016. Delores San Pablo Vermeulen accused Scott of rape. However, there was ample proof that Scott and his family were a 10 hour drive away from the scene of the crime as it was allegedly taking place.

Delores’ motivation for falsely accusing Scott was to retaliate for a lawsuit he brought against her for traumatizing his son when she burst into his family’s home during a police raid. Not long after Scott’s arrest, Delores’ friend told Scott that Delores would agree to drop the charges if Scott would withdraw the lawsuit and pay her five million pesos ($125,000 USD). On more than a dozen occasions, Delores offered to drop her charges against Scott in exchange for money. She also asked Scott to drop his child abuse lawsuit against her. Additionally, Delores was known to lie both in government documents and to her family members.

Scott asked for bail on the day of his arrest. Almost 42 months after his arrest, on September 22, 2014, the court finally considered the bail petition after looking at help from the services similar to Santa Ana Bail Bonds, but the court denied it. The court improperly accepted all of Delores’ false allegations, not taking into account the ample evidence placing Scott 10 hours away from the scene of the crime. Likewise, the court failed to acknowledge Delores’ motivations and blackmail attempts.

The California Innocence Project partnered with The David House Agency, an international crisis agency managing Scott McMahon’s case, in an effort to bring him home. CIP interviewed numerous witnesses, met with Scott, and observed one of his many inadequate court hearings. Unfortunately, the Filipino court system is such that a defendant has no speedy trial rights, no due process rights, and no right to reasonable bail. On the contrary, defendants often only appear in front of the judge every few weeks, and only for 20 minutes at a time. The result is a piecemeal trial with endless delays and cancellations due to changes in the prosecutor and the judge. Scott was not afforded the ability to bail out and assist in his own defense. Instead, he languished in poor prison conditions, an innocent American in a broken and corrupt system.

On August 2, 2016, the court acquitted Scott McMahon of all charges and declared him innocent. He was released from jail shortly thereafter.